Until about 200 years ago nearly all churches were built out of local materials but the canals, and then even more so the railways, gave the opportunity for stone to be transported around the country at affordable prices, and architects began to look at using a greater variety. Most of St. Paul’s as we see it now dates from 1867, when it was rebuilt after a fire, and though the church was rebuilt in a hurry, each kind of stone has its story to tell. Five main types can be distinguished, each of different origins and purposes. 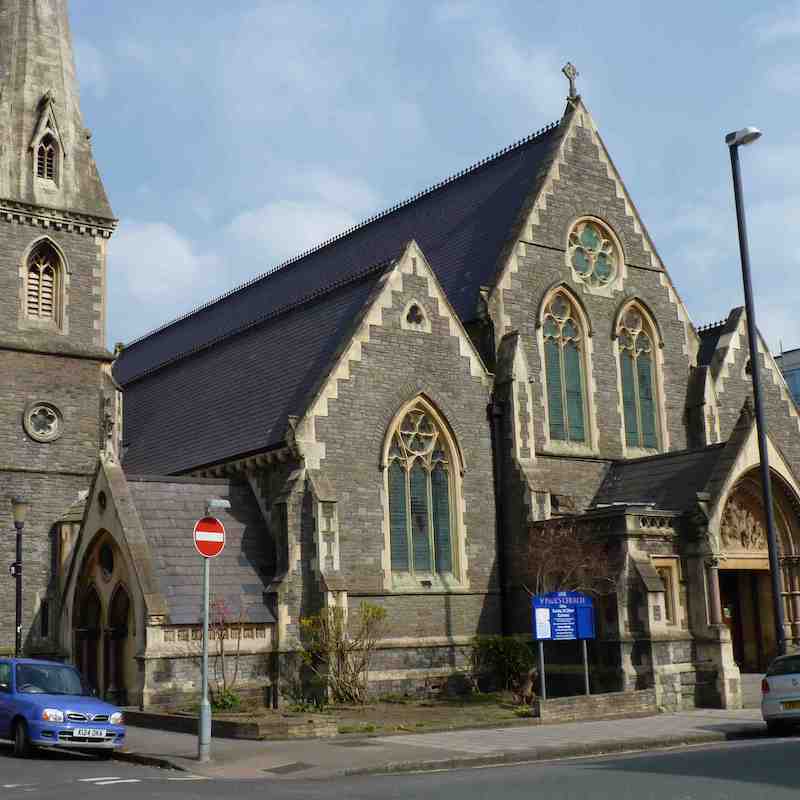 Pennant Sandstone. This grey sandstone is used for the exterior of the building, as it was for many buildings in Bristol in the period 1860-1900. It is a coarse sandstone, sometimes even gritty, and can vary in colour from grey to purple. It comes from the Upper Coal Measures, which makes it about 290 million years old. It is widely found in east Bristol and there were many quarries along the River Avon between Temple Meads and Keynsham. Its attraction as a building stone was that it was local (and therefore cheap to transport), durable, and was capable of being roughly squared off into blocks relatively easily. However its dark colour and the fact that it can be neither carved nor polished mean that it is not used indoors.

Bath Stone. This is the honey coloured stone used for the carved parts of the exterior, and for the bases and capitals of the pillars in the nave and for the arches. It is an oolitic limestone. Oolitic means that it consists of grains that look like fish roe; these are not grains of sand but of lime. Its age is Middle Jurassic, or about 170 million years ago. It was quarried on Dundry Hill for many years, and still is around Bath, where it is worked by the traditional method of extracting it form underground galleries. When it is first brought to the surface it is very soft, almost like cheese, which makes it easy to carve. Thus it is the stone used for decorative items such as capitals, angels and so on. It is then left outside to harden up before being used in buildings.

Red Sandstone. This is used for the pillars in the nave and for the stripy effect in the chancel arch. It dates from the Triassic period, about 210 million years ago, when the climate was hot and arid. Red sandstones of this age is found in many parts of the country, including in the centre of Bristol – Redcliffe Caves are cut into it, for example. However there are both geological and historical reasons for thinking that the stone in St. Paul’s actually came from the Midlands. First, it doesn’t look 100% like the sandstone at Redcliffe, and in any case by the 1860’s stone of building quality was not available from central Bristol. Second, it could well be from the Midlands, where it was extensively quarried as building quality stone throughout the 19th century. The architect for the rebuilding of St. Paul’s was the Birmingham-based Charles Hansom, and we know that he did favour Midlands based-suppliers (as with the windows at St. Paul’s, which were made by Hardmans of Birmingham). Perhaps he preferred to deal with suppliers he knew to be reliable.

Red Granite. This is used as an ornamental stone for columns, for example on the front porch, under the gallery and the newly uncovered columns either side of the window above the high altar. Granite is formed by molten rock cooling underground and forming crystals. Three different crystals can be seen; feldspar, which gives it the red colour, quartz, which is white, and biotite mica which appears as black flecks. Hansom worked on St. Paul’s while he was in Bristol on a much bigger project, Clifton College. Granite just like this is used at the College and I suspect that he ordered a job lot for the College, and used some of it at St. Paul’s! Red granite like this could be from a number of places, but Peterhead in north-east Scotland is the most likely source. 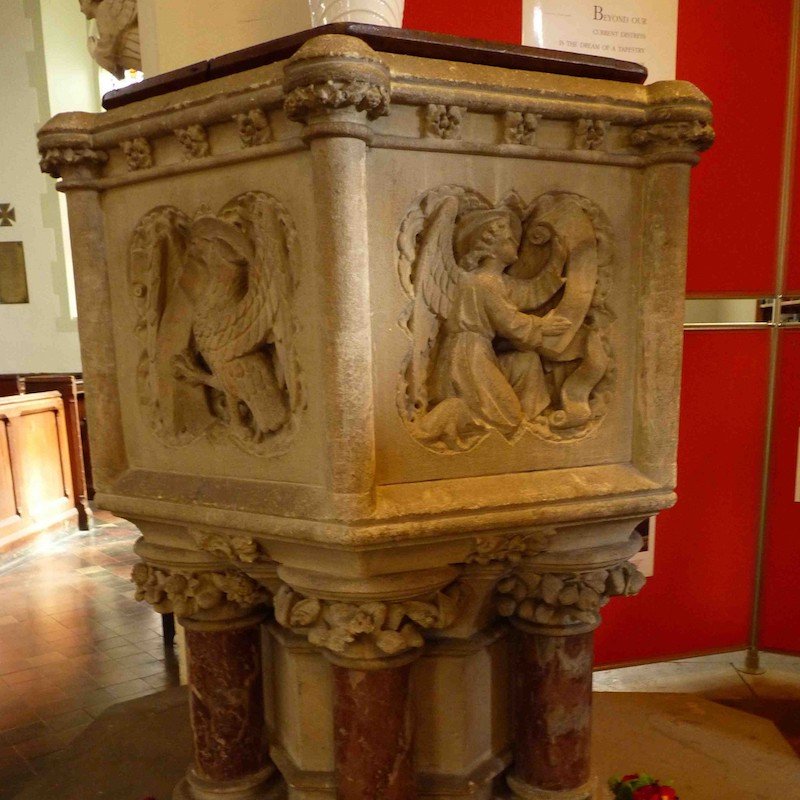 Marble. Marble is the most expensive stone used in the church, and so the one used least often. It appears as decoration on the font and pulpit, and in the newly cleaned small pillars either side of the reredos. Marble is a metamorphic rock, formed by limestone being subjected to intense heat and pressure during earth movements underground, hence its wiggly pattern. The marble we have was probably imported from the Continent, but it would need an expert to identify exactly where it came from!